NEW RELEASES:
As 2019 winds down, a few of our roster artists are releasing new singles, music videos, and songs for the holidays! Thank you everyone for a fantastic 2019 and we look forward to doing business with you in 2020!

~ The Washboard Union released “Country Thunder” to Canadian radio on November 8th, racking up the “#1 Most Added” title at radio for the first two weeks of it’s release. The accompanying music video is drawing praise from ET Canada, The Globe & Mail, and Global TV, for it’s puppetry, cementing the band’s look into iconography forever.

~ Aaron Goodvin released his take on Please Come Home for Christmas, to the world on November 7, while his next single “Good Ol’ Bad Days” comes to radio in January 2020.

~ Kalsey Kulyk released her latest single “Damn You Love” to Canadian Radio in November, along with a new music video! CMT debuted the video at #9 on the CMT 12 Pack, and Billboard included it in their First Country feature, highlighting the best new songs and videos premiering each week.

Stay tuned for updates from the rest of the roster in 2020!

FEATURE:
Sakamoto Agency exclusively books the specialty shows produced by Alberta’s GNR Entertainment, including various musical salutes to past hit makers, and Impressionist Extraordinaire André-Philippe Gagnon. Starting in 2017 with The Legend of George Jones, which received critical acclaim and sold out shows across the country, GNR has built a collection of high quality, multi-media performances in reverence to some of music’s greatest heroes of the past and present.

Recently GNR Entertainment launched two new shows, one honouring the life of Canadian Icon Stompin’ Tom Connors, and another waving the flag of the unforgettable Tom Petty, in addition to the shows hailing George Jones and Merle Haggard that started it all. All GNR shows include video and live storytelling, top-notch musicians, and detailed, sound-alike performances from award-winning vocalists with a heartfelt connection to the original artist.

Recently, the shows have been reconfigured to include a version that can be scaled to music festival performances, in addition to theatre and hall settings. 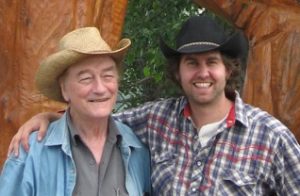 A Salute to Stompin’ Tom featuring Tim Hus (VIDEO)
Take a trip from across our great country in stories and songs. You’ll meet hockey players, prairie truck drivers, potato growers, and fishermen, while you party like it’s a Sudbury Saturday night. This show features many of the songs that made Stompin’ Tom a Canadian treasure, and colourful stories of the incredible life of the Man with The Black Hat, enhanced with a multi-media presentation highlighting Canadian people and places along with classic pictures and videos of Stompin’ Tom’s career. A Canadian songwriter cut from the same cloth as the unforgettable icon himself, Tim Hus opened for Stompin’ Tom on his final tour across the great white north, and the icon was quoted saying “I’ve been looking for 30 years for a young guy who’s proud to write songs about our country. I’d like to pass the torch to Tim Hus.” A musician himself, Hus was honored to take on the role of telling the stories of Canada’s history, and he still performs his own original music across the country.

The Legendary Life of Tom Petty featuring Clayton Bellamy (VIDEO)
The Legendary Life of Tom Petty is a fully immersive concert and multi-media experience that will take you on a journey through the story of Petty starting with his humble beginnings in Florida to becoming one of the greatest rock and roll icons of all-time. Told through powerful music and more powerful stories from the heart-warming to the heartbreaking, it’s all delivered passionately and expertly by award-winning recording artist Clayton Bellamy and his band of talented musicians. JUNO-winner and 4-time CCMA winning member of the platinum selling group The Road Hammers, Clayton Bellamy is a Tom Petty super-fan whose own career was influenced by Petty’s music. He channels the energy and spirit of Petty in a live performance that is straight from the heart. Bellamy is also a spectacular singer and guitar player, SOCAN Songwriter of the Year, a producer, and a television host. There is simply no better way to experience the music of Tom Petty live! From The Heartbreakers, The Travelling Willburys, to his solo material and collaborations with Bob Dylan, George Harrison and Stevie Nicks, Tom Petty’s music has moved generations of listeners.

The Legend of George Jones featuring Duane Steele (VIDEO)
Award-winning singer/songerwriter Duane Steele and his band will take you on a journey of George Jones’ life, spanning over five decades of the honky-tonker’s hits including the No.1 country song of all time “He Stopped Loving Her Today”, as he evolved into a music icon and became the symbol of traditional country music. You’ll also hear the stories of Jones’ life which echoed the songs he sang; success, failure, hard-drinking and heartbreak. Multi-award winning artist Duane Steele has released five studio albums and one greatest hits album, and has charted multiple singles in Canada dating back to 1984. He’s toured the world headlining and opening for Shania Twain, Trisha Yearwood, Sammy Kershaw and more. Duane’s authentic country voice makes him the ideal artist to pay tribute to the legendary Jones, and The Legend of George Jones is a must-see for all music fans.

The Story of the Hag featuring Jess Lee (VIDEO)
In The Story of the Hag, JUNO-nominated singer Jess Lee will take you on a journey through Merle Haggard’s incredible life through stories and songs. With an incredible career spanning six decades, Haggard rose from poverty to notch 40 No. 1 hits through his songs about outlaws, underdogs, the heartbroken and the hard-living. The show also includes the stories from Haggard’s life that echo his songs; he was born poor, raised in a railway boxcar and turned 21 in prison before turning his life around. Jess Lee is a BCCMA Hall of Fame artist who rose to popularity as the singer of the Midnite Rodeo Band, signed to RCA. The group charted 14 singles on the Canadian charts in the 80’s, before Lee charted 5 more hits including the No. 1 song “Crowhill Road” as a solo artist. With a voice praised as the best in Canadian country, Lee effortlessly emulates the rich baritone of Merle Haggard, and The Story of The Hag is a must-see for Haggard fans and music fans alike.