ARTIST UPDATES:
Several Sakamoto Agency roster artists released albums and singles in October, and a couple took home awards! In addition, our entire roster is actively booking for 2020 and beyond, so drop us a line. Here’s what just a few of our roster artists are up to right now: 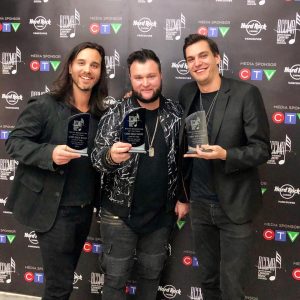 ~ Chris Buck Band took home the 2019 SOCAN Songwriter(s) of The Year Award at the British Columbia Country Music Awards this past month, for the single “Good Ol’ Days”, from his recent album ALL IN. The video for his latest single to emerge from the album, “Holy Ground”  features Chris’ relative’s land, where he built up the memories that eventually formed the song.

~ The Washboard Union added their 27th and 28th awards to the mantle at the 2019 British Columbia Country Music Awards, taking home Group or Duo of the Year and Roots Album of the Year for the second year in a row. The award-winning band is ready to kick off next year with a boom, releasing a brand new single November 8th called “Country Thunder”.

~ Acclaimed musician Bobby Wills (MDM Recordings Inc./Universal Music Canada) just released a brand new EP called ‘Longshot Bar and Grill’, a rousing reflection what he’s best known for; combining classic country with a modern twist. With new singles “Raise The Bar” and “It Matters to Her”, Longshot Bar and Grill is available for purchase or streaming on all platforms, and Bobby is playing his last show of the year at the Saskatoon Country Showcase on November 21, with spring and summer dates to be announced!

~ New roster artist Kendra Kay just released her brand new album ‘How It’s Done’, complete with music video for the title track, which shows how this free spirit has a good time herself! Touring Canadian radio throughout October, Kendra finished up the year opening for Corb Lund at the Canadian Finals Rodeo Cabaret in Red Deer, November 2, to a sold-out crowd.

~ Jason Benoit released ‘Revolution Pt. 1’ on October 11, featuring his recent single “I Won’t Go” and latest single to radio, “Forget to Forget”. Representing an evolution of Jason’s sound, the new album was initially titled Evolution Pt. 1, until a typo had everyone on his team agree that Revolution was a more powerful, and accurate message.

Innovative Thinking. Old School Values. As part of the services we provide, Sakamoto Agency moves forward with fairness, integrity, and kindness on all ends of the deal. Get in touch with us for: