Sakamoto Agency and our valued roster of artists have been working hard to adapt and create new ways of enjoying live music while we work towards a return to large gatherings. From reduced capacity special shows, to online concerts, drive-ins and beyond, artists and companies are getting creative; nothing new to the music industry!

Drop us a line to book any of our talent, OR if you’re a looking to connect with a venue, or a venue looking for promoters, we’d be happy to help. Stay tuned for some exciting growth announcements for the agency, to come before the end of 2020.

~ Aaron Goodvin is booking dates for the ‘Together Again Tour’; a duo-show presented by the platinum-selling artist and CCMA Songwriter of the Year. After an extended break, Aaron is bringing his enthusiasm to physically distanced audiences across the country, in an intimate setting. Enjoy hits like the #1 hit “You Are”, gold single “Lonely Drum”, latest Top Ten single “Good Ol Bad Days”, newest single “Every Time You Take Your Time” (featuring his wife Victoria), and many more. Aaron is also currently nominated for a second year as Songwriter(s) of the Year, as well as Interactive Artist of the Year at this weekend’s Canadian Country Music Awards (CCMA).

~ Kalsey Kulyk is on the road in a brand new tricked-out Sprinter Touring Van with hubby Eric Ethridge, playing physically distanced concerts from the rooftop of their motorhome and more. Follow their journey at www.loveontheroad.ca. Nominated for Roots Album of the Year at the CCMA’s, Kalsey also has a brand new single called “Who I Was” that has just reached Top 40 on radio! Kalsey and Eric will be performing for the Country Music Association of Ontario Awards ceremony on October 4th! To book a show in Canada with Kalsey, contact Paul Biro at [email protected].

~ The Washboard Union are currently nominated for a 3rd time as CCMA Group of the Year, and if they win it will be a feat only achieved by two other bands in CCMA history! They are also nominated for the FIFTH time for Roots Album of the Year, for latest offering “Everbound”. Their recent single “Country Thunder”, which reached #2 on the country charts, is also nominated for Video of the Year, Video Director of the Year, and Record Producer of the Year. But that’s not all! While their Canadian tour dates have been postponed to 2021, the band has been taking every opportunity to perform both live and online, completing fundraiser shows for STARS Air Ambulance, and playing an intimate set for 50 lucky folks as part of the adapted Summerset Music & Arts Festival in British Columbia. The Washboard Union is also up for a possible 6 awards from the BC Country Music Association this year.

~ Jason Benoit is playing select shows at theatres across his home province of Newfoundland September 24-October 5, for physically distanced audiences of up to 100 people (50 per night x 2 nights). These shows are the very first to be booked in the return to live audiences for the Arts and Culture Centres of Newfoundland and Labrador, and the whole team is tremendously excited! For more info visit www.artsandculturecentre.com. 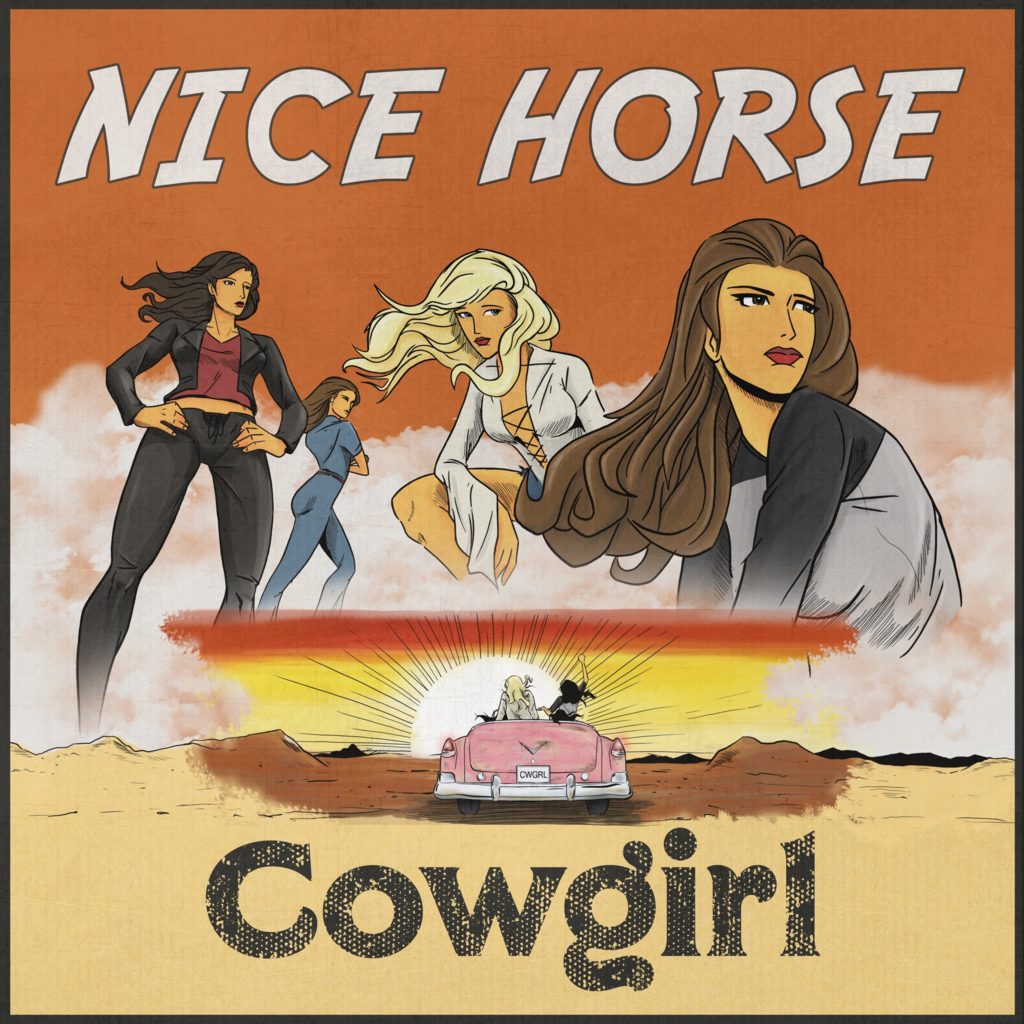 ~ Nice Horse have recently started working with Warner Music Canada, and are enjoying the success of their first Top 40 single “Cowgirl”, which has also reached #2 on Radio Disney’s country charts, and being nominated for Interactive Artist of the Year at the upcoming CCMA’s. To celebrate, they’re playing a special reduced capacity Halloween show on October 31st at the Fairmont Hotel in Banff, Canada! Book a room at the hotel to enjoy the limited capacity show!

~ The Abrams have been spending time producing a video podcast while they await live shows, check out “Off Road with The Abrams” on YouTube. They won’t be waiting long however, a few live shows with the group will happen October 5th in London, ON to a reduced capacity audience at Social Bowl, and again on October 16th at the Festival of Small Halls in southern Ontario.

~ Bobby Wills just released new single “Wash My Truck” in July, and has seen it added to 7 editorial playlists on Spotify and Apple Music! Keeping the music coming with singles leading into a new release in 2021, Bobby will be streaming live from the legendary King Eddy in Calgary, AB on October 3rd, with a limited live audience. Check him out live!

~ Chris Buck is currently nominated by the BC Country Music Association for Entertainer of the Year, and Male Artist of the Year! Working hard on writing and recording for release in 2021, Chris is also hosting a live streaming series this fall, which kicked off with a birthday performance in late August, with musical colleagues and friends Katie Rox (Nice Horse) and Rod Black.

~ Andre-Philippe Gagnon is doing virtual shows online, and if you close your eyes, it’s almost like listening to a concert by every famous performer from the last 50 years of music! Check out www.andrephilippegagnon.com and request a booking with the number one singing impressionist in the world!

Sakamoto Agency has been a vocal participant in the fight against COVID-19, and the struggles of the music industry in the face of it. Speaking to media, operating partner Paul Biro has completed several interviews on the state of the music industry, and helpful tips to overcome the adversity we are faced with. Check out the interview on Unison Benevolent Fund’s website about Staying Creative to Cope, and another interview by Country Music Alberta on the State of the Music Industry this summer. Sakamoto Agency is also nominated for Booking Agency of the Year at this year’s CCMA’s and Paul Biro is also nominated for the Ron Sakamoto Talent Buyer of the Year – an honour he won in 2019.

Sakamoto Agency would like to draw attention to all our artist’s CCMA nominations prior to the awards show in Canada this weekend! 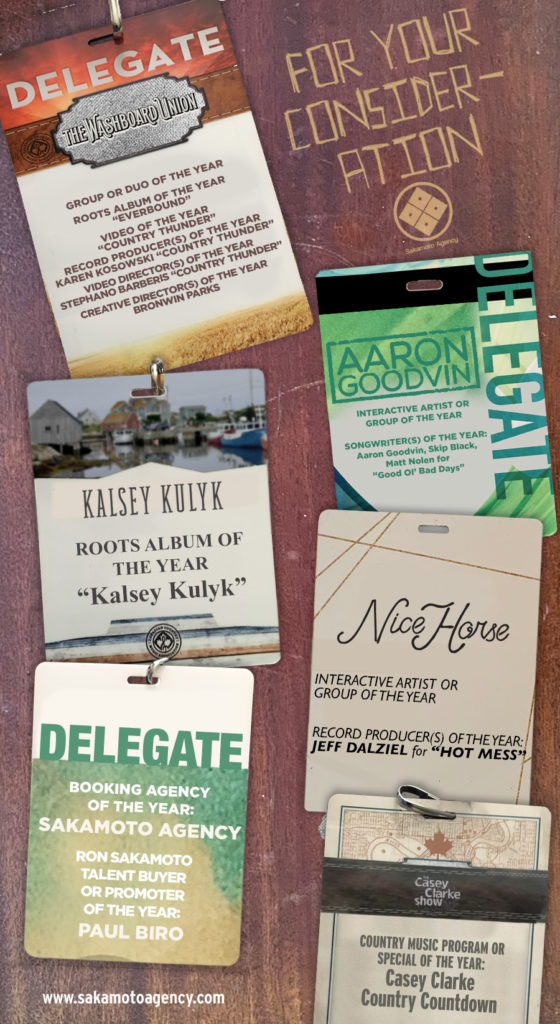