For Immediate Release: November 12, 2019: Sakamoto Agency is pleased to announce the signing of First Nations drum and vocal group Young Spirit, to the international roster. While the group has spent years touring the Pow-Wow and Round Dance circuit throughout North America, they are perhaps best known for their nomination at the 61st Annual Grammy Awards in the Best Regional Roots category, and the viral media sensation they created when performing on the red carpet leading up to the awards.

A passionate and dedicated group of individuals who continue to tour, Young Spirit is also eager to share their music in new settings, and are available for all ranges of events and venues. Young Spirit’s traditional and original songs reflect the importance of family, community, love, and celebration, and while the group affirms their status as a powerful voice for Indigenous culture, these same themes are shared with all cultures. Young Spirit’s drum keeper Jacob Faithful says, “Life is precious and we all have a choice about how we use our time here on Mother Earth,” so Young Spirit makes the choice to spread joy and healing through music.

Sakamoto Agency’s Paul Biro is ecstatic to welcome this unique group to the growing roster, and Sakamoto Agency shares many of the same core values as the group itself. “Young Spirit is a modern example of an ageless tradition, and through their focus on retaining their culture, we are lucky to experience powerful music and lessons that speak to our hearts when we listen. Not only are they a tremendously talented and entertaining group, they are dedicated, hard working folks who make great efforts to encourage youth to realize their value and follow their dreams. We are honoured to welcome Young Spirit to the roster.”

Young Spirit joins a growing roster of diverse artists including original music, superstar tributes, comedians, impressionists and speakers. To book Young Spirit or for more information about Sakamoto Agency, get in touch with us!

MORE ABOUT YOUNG SPIRIT:
Founded in 2001 at the Frog Lake Cree First Nation, Alberta, Canada, Young Spirit (oskiyak kīsik in Plains Cree) has quickly become one of the most in-demand and respected groups on the Pow-Wow trail and the Round Dance circuit, first singing at the Samson Cree First Nation Pow- Wow the same year they formed. Since then the group has never looked back, traveling ceaselessly throughout Canada and the United States.

The group was created with the goal of empowering Indigenous/Native American/First Nations youth with music and language. Noted for extensive use of the Plains Cree language in their Round Dance and Pow-Wow songs, Young Spirit views it’s music as a catalyst for sustaining Indigenous culture and sharing its importance with the world.

Among the many singing championships Young Spirit has won over the years, the group earned the Worldwide Championship title at the Gathering of Nations Pow-Wow in Albuquerque, New Mexico in both 2013 and 2018. Their album Mewsinsational – Cree Round Dance Songs earned them an Indigenous Music Award for Best Hand Drum Album in 2018. The same album received a nomination in the Best Regional Roots category at the 61st Annual Grammy Awards, where the group showed up and performed live on the Grammy red carpet, taking Indigenous music to a place that it had never been shared before. 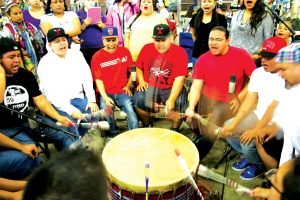