Despite the challenges presented in 2020, Sakamoto Agency and it’s artists have enjoyed some fantastic achievements this year! Our agency was honoured to be named Booking Agency of the Year at the Canadian Country Music Awards, for the first time ever! Operating Partner and Agent Paul Biro took home the Ron Sakamoto Talent Buyer or Promoter of the Year award, for the second year in a row.

The CCMA Awards also saw The Washboard Union take home their third-in-w-row award for Group or Duo of the Year. Even better, the group also took home the Roots Album of the Year award for the 5th consecutive time, though the award was renamed from Roots Artist to Roots Album in the midst of their winning streak.

Sakamoto Agency artists have also been recognized in provincial award ceremonies. In October, The Abrams won the Roots Artist or Group of the Year award at the Country Music Association of Ontario (CMAO) Awards, and The Washboard Union are nominated for a total of 6 awards at the BC Country Music Awards taking place November 29th online. Nominations are also expected for Sakamoto artists in the Country Music Alberta Awards, with nominations due up before the end of the year. We’ll update this post to include those when we know! 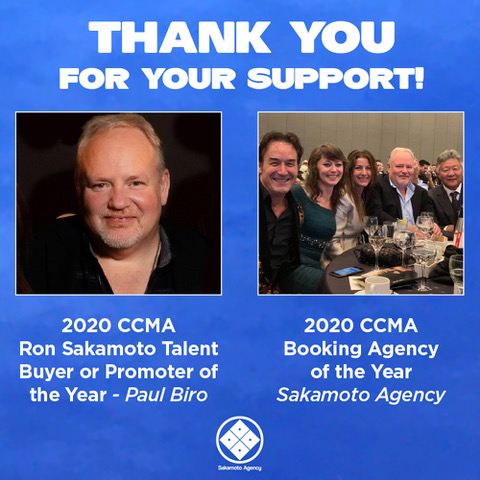