2020 has started off on the right foot for Sakamoto Agency, with our agent Carla Hackman taking home the Talent Buyer of the Year Award at the Alberta Country Music Awards, in Red Deer, AB this past weekend. Carla’s honour comes only a few months after agent and VP Paul Biro won the same award at the national level, at the Canadian Country Music Awards.

Now that we can legitimately describe our company as “award-winning”, how can we help you and your business in 2020? Get in touch with us for your programming needs, and check out our diverse and also-award-winning roster of artists!

ARTIST UPDATES:
~ After a mammoth year in 2019, Aaron Goodvin started off 2020 with a JUNO nomination for Country Album of the Year, for his 2019 release ‘V’. His latest radio single “Good Ol’ Bad Days”  was the #1 Country song and #1 Canadian song added at Canadian radio upon release this month. In addition, Aaron’s first USA tour has just been announced, and “Lonely Drum 2.0” is hitting the airwaves across the United States, reviving the Platinum Canadian single in a new market with a new sound. For more info visit www.aarongoodvin.com.

~ Kalsey Kulyk premiered the video for new single “Roll With It”, on Billboard last week, chronicling those who stay in bad relationships since it’s all they know. Writing about a topic doesn’t mean living it though, as the country crooner also married her country-crooning sweetheart Eric Etheridge, this past fall. Her previous music video for “Damn You Love”, also spent the last 3 months in rotation on CMT, reaching #8 on the CMT 12 Pack.

~ The Washboard Union’s latest single “Country Thunder” is steadily climbing the Canadian charts, reaching #22 last week, and will see the band play the Canadian editions of the Country Thunder Festivals, in Alberta and Saskatchewan this coming summer, as well as many other shows to be announced at www.thewashboardunion.com.

~ Singing Impressionist André-Philippe Gagnon is kicking off 2020 with a few shows in Ontario, a brand new website, and a new promo video that truly showcases the range of his talent. One of the most entertaining acts on the market today, check out www.andrephilippegagnon.com.

SHOWCASE INVITES:
If you’re near Toronto or Nashville, come on out to a show! 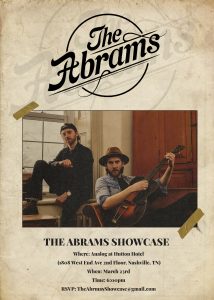 ~ Musical virtuoso brothers The Abrams will perform at an industry showcase in Nashville on March 23rd at the Analog Room in the Hutton Hotel. If you are interested in attending this showcase, please contact [email protected] or reply to this message.

The Abrams have toured throughout North America since they were children playing bluegrass in the family band, and their latest effort fits them perfectly in today’s popular country music, with such singles as “Good Old Days” and “Sounds Good to Me”. 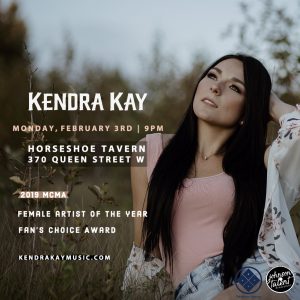 ~ Kendra Kay performs a feature showcase in Toronto, Canada on February 3rd, at the Horseshow Tavern (370 Queen Street W. If you are interested in attending this showcase, please email [email protected] or reply to this message.

Kendra Kay is the 2019 Manitoba Country Music Awards Fan’s Choice award winner AND Female Artist of the Year. She’s a powerhouse vocalist who captures the spirit of country in a modern landscape.

Our entire roster of original artists and specialty shows is booking into 2020 and 2021 presently! Get in touch with us for more on Bobby Wills, Chris Buck Band, Nice Horse, Jason Benoit, and so many more.