CCMA WRAP UP:
The Canadian Country Music Awards just wrapped up for 2019 with a wildly successful year in Calgary, Alberta, with several awards coming home to the Sakamoto Agency family. The Washboard Union continue their reign as Group or Duo of the Year with their second win in a row, and the band also took home the award for Roots Album of the Year for the third time, this year in a tie with Donovan Woods. 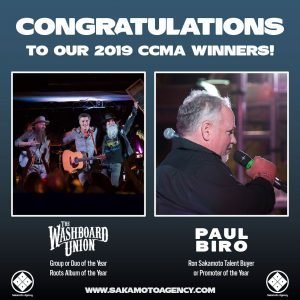 Our own Operating Partner and primary Agent Mr. Paul Biro, took home the aptly named Ron Sakamoto Talent Buyer or Promoter of the Year award, a category he’s been nominated in many times over. Congratulations Paul!

Sakamoto Agency also hosted a showcase during the CCMA’s in Calgary at the longest standing country music venue in the city, Ranchman’s Cookhouse and Dance Hall. Billed as “The Washboard Union and Friends”, the event saw over 200 VIP industry delegates and filled the rest of the venue to sold-out capacity with eager fans of The Washboard Union, The Abrams, Nice Horse, Chris Buck Band, Kalsey Kulyk, Jason Benoit, Bobby Wills, Kendra Kay, and many more. Sakamoto Agency would like to send a huge thanks to our partners at Ranchman’s and everyone at the CCMA’s for a fantastic week.

KARAC HENDRIKS:
Karac Hendriks has worked for many years as a highly sought- after guitarist and harmony vocalist for some of Canada’s biggest country acts. He’s toured with the likes of Gord Bamford and Adam Gregory, but with a dream to take centre stage himself, Karac took a final bow and decided to pursue a solo career in 2016. Fast forward to closing out last year with a performance of his 2018 hit “This Road Is Mine” at the Alberta Country Music Awards, the seven-time ACMA nominee kicked off 2019 with a new single called “Some People’s Kids”, reaching the Top 100 in the first two weeks of it’s release.

GARRETT GREGORY:
Garrett Gregory is an ambitious vocalist with a shockingly powerful voice and a live show that has been turning heads with his breakthrough into country music. Even so, while his powerhouse voice packs a strong right hook; his real talent lies in his high energy, his theatrical and captivating shows, and his natural ability to completely move a crowd. While he recently released an EP with the band Chillbilly and can cover most any song, Garrett has branched out on his own, writing and recording a solo album that is expected for release in 2020. His recent showcase performances during Country Music Week created a buzz among the delegates and we are excited to see what Garrett produces in the coming year.

ARTIST UPDATES:
Our roster is actively booking for 2020 and beyond, with so many artists releasing new music. Here’s what a few of them are up to.

~ Kalsey Kulyk released her debut self-titled album on August 30th scoring the #2 album spot on iTunes, with the singles, “Bad Liar,” and “More Time” featured. Since the release Kalsey has seen her fan engagement increase by over 100% on all platforms, had her music added to 23 streaming playlists, and spun on over 30 Canadian country radio stations, while finishing up a radio tour of at least 25 stations. For all upcoming shows and news on Kalsey Kulyk, visit www.kalseykulyk.com.

~ CMAO Roots Group of the Year The Abrams just dropped a new single “Good Old Days” (LINK) currently streaming and spinning on Canadian country radio! This band was the “sleeper hit” of the 2019 CCMA’s, with wild performances at several showcases and at the public Fan Village at Canadian Country Music Week. The band hits the road in November for a series of shows in southern Ontario, for all announced dates please visit www.theabramsmusic.com.

~ The Washboard Union added their 26th award to the mantle at this year’s CCMA’s, and the very next day, announced a November tour in southern Ontario hosted by LiveNation, and a few shows in Canada’s Maritimes, with fellow Sakamoto roster artists Jason Benoit as opener. In the midst of their tour, the band also heads south of the border for their first US dates in Texas! For all announced dates, please visit www.thewashboardunion.com.

~ Aaron Goodvin will be opening for Rascal Flatts on a series of dates in western Canada in October 2019, tickets are on sale now! Also actively touring in the USA, Aaron is flooding the airwaves across North America. Now on his fifth consecutive top ten single, including Platinum selling “Lonely Drum,” and the #1 single “You Are”, there’s no doubt Aaron Goodvin is in demand! For all upcoming shows including US appearances, visit www.aarongoodvin.com.

~ Jason Benoit will open the November shows in southern Ontario for The Washboard Union. His latest single, “I Won’t Go” leads up to his long-anticipated album release, which fans can pre-order on September 20, for digital release October 11 and available everywhere October 18. Visit www.jasonbenoitmusic.com for all the latest news and announcements.

~ We are busy booking shows for the rest of the roster as well, get the latest on Nice Horse, Chris Buck Band, Andre Philippe Gagnon, Tristan Horncastle, Blackie Jackett Jr. and more, check them out at www.sakamotoagency.com.

In just the last two years, Sakamoto Agency has also programmed artists at a wide range of festivals and events, including Willie Nelson, Tom Cochrane, Lonestar, Finger Eleven, Virginia 2 Vegas, Lee Aaron, Buckcherry, Meghan Patrick and David Lee Murphy, just to name a few! Get in touch with us if you’re interested in having Sakamoto Agency program your upcoming event.